A busy day in Bothwell

Bothwell is normally a sleepy little place with not much happening, streets empty and very little traffic, but today was different.

Wednesday was the opening of the Central Highlands Information Centre and a lot of people had come to town for the occasion from the outlying district and Hobart.  The centre was opened by the Governor of Tasmania, her Excellency Professor the Honourable Kate Warner AM accompanied by her husband Richard Warner and a Navy Officer, don't know who he was and what looked like a security person. 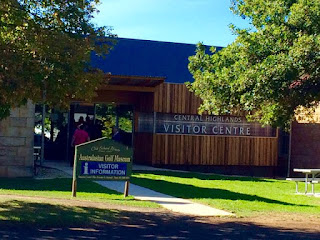 The information centre was full of people, about 50 I reckon, which is a lot for Bothwell. We met and spoke with the Mayor of the Central Highlands Council, Deirde Flint OAM.  The Deputy Mayor Andrew Downie and many other councilors where present as well as the designer and the builder of the Information Centre.  The Mayor was very friendly and told us about the house where she lives and said that many people stop to take photos.....we owned up as being one of them.

There were displays of accommodation around the area, some merchandise, three beautiful tapestries down by locals, each 4 inch square depicting some history or part of life in the area and old books and documents in the Historical Society.


I found out about the opening yesterday when I was in the old information centre/golf museum, which is in front of the small caravan parking area where we are staying.  Yes, golf museum.  They take their golf very seriously here in Bothwell because the local golf links, Ratho, is touted as being the oldest golf links in the southern hemisphere.  I spoke with a couple of the staff at the Centre,  Roslyn & Colleen.

Colleen is a one-of-a-kind type person who always wears trousers as well as a strange hat, black fingerless gloves and has untidy long grey hair. She practiced curtsying on me which was a riot and the banter was going back and forth.  I told her she needs to wear a skirt if she was going to curtsy because it was not working for her in pants. She said she had a skirt, a very old one, that she only wears at home on very hot days.  I am pleased to report that on the day she did wear her trousers, fingerless gloves, no hat and she hair was tidy and neatly plaited.  She also had her camera with her and after the event, took a photo of Ian, Nick and I standing in front of the government car.  And, she said that she thinks that we should live in Bothwell because we belong here....well.....you never know what the future holds.

Well, enough about golf.  The dignitaries arrived sharply at 10.30 in a beautiful 2 month old Range Rover, with a glass top.  We know it is two months old because Nick and I had a long conversation with her smartly dressed driver, Ian, a bit later on after the opening.

The information centre joins together two beautiful heritage listed buildings.  One housing the golf museum and the other housing the Bothwell Historical Society. The opening ceremony was a very proud moment for all those who have been involved over a number of years....and, well done to them for a great job. The building itself took some time due to lack of supply of materials and weather which, last year included snow.

The Governor was in for a busy day.  She was to visit the school after the opening, then another place (forget where), then the Nant Distillery where she would be having lunch.  We had been waiting for a nice day to go to Nant ourselves (today turned out to be a nice day weather wise) and I said to Nick we should go today as well because I am sure that they would have the best food and service because of the Governor being there, but we decided against it.  Besides which we had to stay at home for a grocery delivery that was coming from Hobart.

There was going to be a civic reception in the evening and when I was speaking with Colleen  the day before the opening I was kidding her about not being invited to the reception and she said I couldn't come because I had nothing to do with the new centre or the old one etc etc (in the nicest way of course) and besides which, they had already ordered the cucumber sandwiches....haha.

After the opening, we went a couple of doors down to the craft shop, had another look around and purchased some very thin metal knitting needles for $2.50.  After that we noticed that there was a vintage Rolls Royce at the garage.  We took a walk down there to discover about 5 more of them at the coffee shop.  Nick took some photos and we spoke with a lovely lady who told us that there was a group of them (20 as it turns out) who had come over from Victoria and South Australia for a 12 day road trip.  The lady we spoke to had a 1921 model Rolls in silver.  See photo below. 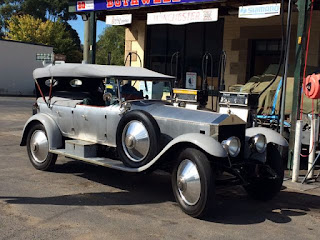 She said they were having a marvellous time and we talked about us living on the road and she said we were making her quite jealous.  When speaking with Ian, the Governors driver, he told us that the Rolls Royce group was going to attend Government House as well. 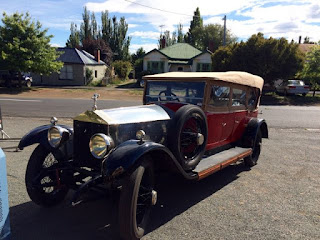 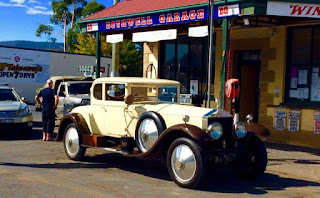 We left Ian, still standing outside of the Information Centre, waiting to the Governor and saying that we were off for coffee.  He asked where we were going and I said "Cafe K"....that is our Kedron Caravan where we have the best coffee, from Skybury (Atherton Tablelands)  served with a huge dollop of Victorian Gippsland double cream.

Who would have thought that we would get to see the Governor of Tasmania and the Mayor of the Central Highlands Council, here in sleepy little Bothwell.

Thank you reading about our journey and for your comments. I read all comments but may not aways be able to respond.

Journey to Somewhere - Gail and Nick
Australia
We are a retired couple, we are soul mates and we have decided to head out there for a simple life on the road, meeting new people and experiencing new things. We hope that you will enjoy the "Journey to Somewhere" with us as we make our way around and about in Australia in our Iveco Daily Van and a Kedron XC3 Caravan.